Dave Edwards announced as Chairman for the IOM Aviation Conference 2023 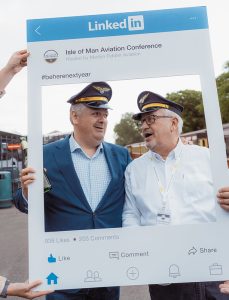 The Martyn Fiddler Aviation team are delighted to announce Dave Edwards as chairman for the 2023 Isle of Man Aviation Conference. Now in its 11th  year, the conference will take place on 21 June 2023 and registration will open soon! Dave is Chief Executive of the Royal Aeronautical Society and has attended many of our conferences in the past, making him the perfect candidate for the role.

The conference has become the place to be for all business aviation industry professionals and provides a venue to discuss the issues and challenges facing the industry, whilst showcasing the Isle of Man’s unique ethos towards business in terms of expertise, organisation, energy, and charm. We believe Dave’s charming and energetic character will make this a win win for the Conference.

Having started learning to fly aged 14, Dave entered the business aviation industry in 1997 with Magec Aviation at London Luton Airport. He moved to Gama Aviation in 1998 to work in Flight Operations, joining a company of five aircraft and 40 people, rising to become Group General Manager and Managing Director, Middle East, and Asia, with a fleet of over 120 aircraft and 300 people when he left fifteen years later.  During his time with the company, he led several significant programmes, including Air Ambulance and Special Missions work. The last five years of his time with the company were based in the United Arab Emirates heading up the group’s expansion into the region and the development of the business in the UAE, Kingdom of Saudi Arabia, and China.

In 2013 he joined Qatar Airways as Executive Vice President, responsible for the airline’s executive jet division, airline whole aircraft charter, as well as the business jet maintenance facility and VVIP ground handling.  During his time with the airline, he led the fleet purchase program of Gulfstream G500 and G650ER aircraft, becoming the first commercial operator of the types worldwide.

In 2016 he returned to the UK to establish a consulting business with three colleagues, specialising in supporting businesses during periods of significant growth in the aviation and tech industries.  Alongside this, in 2018 he was appointed as Chief Executive of The Air Charter Association, the global trade body representing the interests of companies in the air charter sector and led the organisation through a period of significant change and development and spearheaded the growth of relationships with Government and Regulators around the globe, as well as growing links with other trade bodies.

He now serves as a trustee for the aviation charity Fly2help, is a Freeman of the City of London and a Liveryman of the Honourable Company of Air Pilots, all alongside his Chief Executive position at the Royal Aeronautical Society.

“I’m delighted to follow Graham Williamson as Chair of the Isle of Man Aviation Conference.  Having been an avid attendee for a number of years it’s an honour to step up to chair one of the most focussed and bespoke conferences in business aviation.  As we saw when the conference emerged from the pandemic in June this year, it remains a key part of the business aviation calendar, bringing together people from all over the world to learn, discuss and network – things that we are vividly reminded are best done in person.  I’m looking forward to seeing you all on the island in June 2023”.

We are very excited to welcome Dave as the new chairman of the Isle of Man Aviation Conference, and we look forward to opening our doors to you all once again as we come together to host the islands biggest and most important conference yet!